Survival is only the beginning

How it all began… April 11, 2012 was the day that Kirk Breneisen’s life changed forever. He was a passenger in a car that was involved in a collision when the driver made a left turn in front of another car traveling at 60 mph. The crash occurred on Rte. 14 in Barrington, Illinois during the morning rush hour. The car that Kirk was riding in was knocked into the ditch resulting in more than twelve inches of intrusion on the passenger side, pinning him inside.

CenCom 911 dispatched Barrington Fire, Barrington Police, and Lake County Sheriff Deputies to the crash scene. Fox River Grove Fire and Flight For Life-McHenry were requested by Barrington once they arrived on location.

Due to the damage sustained by the vehicle, prolonged extrication was required to remove Kirk. The extrication was completed just as the helicopter landed. Due to the severity of Kirk’s injuries it was critical that he reach Advocate Condell Medical Center, the closest Level I trauma center, as quickly as possible.

Once Kirk arrived at Advocate Condell he went immediately to the ICU. He did not have surgery for another six days. It is amazing that he even survived due to the severity and extent of his injuries. 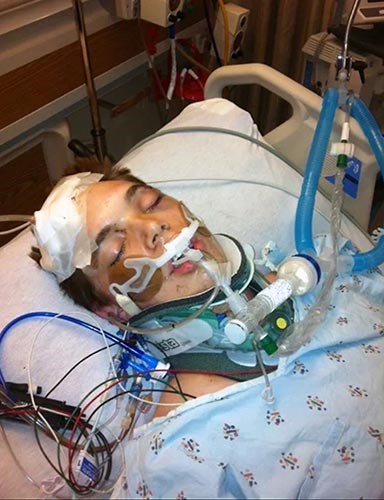 He suffered five brain bleeds – three in the thalamus and two in the corpus callosum. His pelvis had bilateral open fractures which required the skills of an orthopedic surgeon who specialized in this type of high energy, impact injury. Kirk’s other orthopedic fractures were numerous; these included his collar bone, femur, ribs – front and back, ankle, bottom inch of his tibia, and sitz bones. Both his spleen and liver were lacerated as well as his left eyebrow. The right lung had collapsed, requiring placement of a chest tube in the field. Kirk experienced massive internal hemorrhaging so he received blood products before, during and after surgery. Thank goodness for those who donate blood! His hearing, vision and sense of taste were also impaired due to his injuries. Before the accident he struggled with dyslexia and ADHD; afterwards he lost his ability to cope with the dyslexia and the ADHD was exacerbated.

Kirk spent eight days in Condell’s ICU and then was transferred to the Illinois Masonic Rehab Center where he spent three weeks. He was discharged home where he had to learn to transfer his 6’8” frame from the hospital bed to a wheelchair to perform basic tasks such as bathing and getting dressed. He was non-weight bearing for an additional two months after he arrived home.

In 2013, nearly a year from the time of the accident, Kirk was faced with the possibility of two more surgeries. The first involved removing the hardware from his hip and ankle where the screws were putting pressure on muscles and nerves. That one was completed. The second potential procedure would be to remove hardware that was used to repair his pelvis. It is creating a considerable amount of pain for him but the surgery is very risky and there is no guarantee that it will be successful. This one has been put on hold.

Kirk continues to live in pain. He shared in his 2013 victim impact statement that “Each day I have every hope and desire that I will wake up with less pain than the day before. I want things to be the way they were before the accident. Since I cannot go back and undo the accident, I hope being able to share my trials will help bring me some sort of closure.”

Where to from here… Survival after a serious accident or significant medical event tends to be the simplest part of the long term equation; recovery takes enormous amounts of time and effort that those on the outside cannot begin to comprehend. One has to navigate the “system” that is health care and understand what is needed and how to get it. All of this is done while under extreme stress, with no clue about what questions you should be asking. In other words, you or someone in your support system has to be an informed advocate. You must learn to speak the language by educating yourself. No one knows you like you do; you must analyze, question, and request without becoming a bother to the providers. You don’t want them to negate your concerns or ignore your questions.

Kirk made the progress he has for two reasons; determination combined with attitude plus the presence of a strong support system.

These have been, and continue to be, imperative to his long term recovery. He kept his records, did his research, analyzed what was going on with his own body and asked questions. His family, especially his mom Kristine, provided a strong support system throughout his survival and on-going recovery. Patients who have family or others helping in their recovery clearly do better. In Kirk’s case, his accident helped to bring his family closer.

Kirk continued his intensive physical therapy program once he left in-patient rehab. He received in-home therapy until he became mobile, then he went three times per week to the rehab center. He dedicated himself to surpassing the expectations of his neurologist and physical therapist. In this structured program he made great strides in returning to a “normal” life. In July 2013, the therapy sessions ended as it was deemed he no longer needed the supervision and guidance of a physical therapist. This is where Kirk began to struggle. Losing the environment where he was being pushed to excel affected his focus and slowed his progress down. This is an issue with many traumatic brain injured and other types of patients; once their allotted therapy sessions are completed and/or the insurance benefits run out, there are few resources available to keep them moving forward in their recovery. This becomes the turning point; will they continue their recovery and go on to a productive life or regress and become more and more isolated due to their limitations.

One step at a time

Kirk continues to see his neurologist who is helping him with his medications and ADHD. To be able to obtain more PT sessions, Kirk now has to see his primary care physician and start from scratch.

It is his and Kristine’s hope that by having another evaluation he will be provided the additional PT that he desperately needs. To complicate things, he now suffers from insomnia, so when he finally does become so exhausted he sleeps he has trouble waking up to make his appointments. This becomes a vicious cycle. The medications that he has to be on for pain and other issues also contribute to this problem. For now it is day to day, one step at a time.

Where does Kirk see himself in a year from now? He needs to learn how to manage his pain, the ADHD and his physical recovery. This will enable him to once again accelerate his progress and regain his focus. Once he is able to do that, he plans on attending college in Montana to work on a degree in engineering. This will be quite the task due to his cognitive issues but he is up for the challenge.

In Kirk’s own words…

”My challenge now is to deal with my new normal. It is hard to believe it will be two years in April 2014. I do not like the fact I need to adjust or the fact that I will forever need to manage my pain. I have to accept it but it is hard.

I will be eternally grateful for the Barrington Fire Department and Flight For Life crew who gave me the 'magic medicine' that kept me from dying. I am certain without their assistance I would not be here. Their decision-making, quick response and treatment kept me alive.

Being at the presentation for the FFL-McHenry Scene Call of the Year Award for Barrington Fire for the accident where I was injured was very impactful for me. Hearing from those at the scene about their assessment of the injuries made me realize just how lucky I am to be here.”

Comments for "Survival is only the beginning"