Once she was stabilized, agencies quickly realized that her injuries were extremely critical and Flight For Life-Wisconsin was requested to the scene. “Emergency response and the trauma system worked exactly as it should on that call, getting Nissa rapidly to the Level I Trauma Center at Froedtert Hospital to care for her life-threatening injuries,” stated Claire Rayford, spokesperson for Flight For Life.

Nissa underwent several surgical procedures and many weeks in Intensive Care to repair the multiple complex injuries she sustained in the crash.

According to Nissa, “My doctors at Froedtert told me that I’m a miracle.”

After five weeks, Nissa was transferred to the caregivers at the St. Agnes Hospital Center for Physical Rehab – where she remained for several weeks to continue her recovery process. 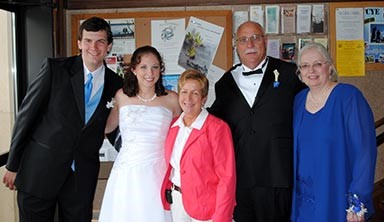 Today, she is at home, but continues to receive occasional therapy at St. Agnes Hospital Outpatient Therapies department.

Nissa’s story is an inspiration to both health care providers and families who have faced similar incredibly challenging circumstances. Nissa’s goal is to continue her final year as a senior student at the University of Wisconsin – LaCrosse. She and her family are confident that she will succeed.

The role of emergency response and the health care system is to provide the opportunity for survival; the rest is up to the patient and their support system. Flight For Life’s 25,000th patient is a shining example of how this happens.

Comments for "Recognizing our 25,000th patient"