Giving Back by Donating Blood

My flight was November 19, 1989 due to a single vehicle car accident at the intersection of Lily Road and Hampton Avenue in Menomonee Falls. I fell asleep at the wheel, striking a telephone pole at the left front tire area, wrapping it around the pole. An EMT on her way home came upon the crash shortly after it had occurred and called 911.

Both Brookfield and Menomonee Falls Fire Departments responded to find me pinned in my car. Realizing that it would take substantial time to get me out, Flight For Life was called to give me best chance at survival. There was a discussion whether to cut off the lower left leg to save time as my heart was drowning in blood; they decided to wait. The next two hours were spent cutting my car apart while the Flight For Life staff was stabilizing my numerous injuries including a broken lower left leg, several broken ribs, a punctured lung, and a bruised heart. Flight For Life then transported me to the best place possible, Milwaukee County Medical Complex (now Froedtert Hospital). After nearly two weeks in the hospital, several surgeries (including a steel rod and screws in my left leg), and months of rehabilitation, I made a full recovery. 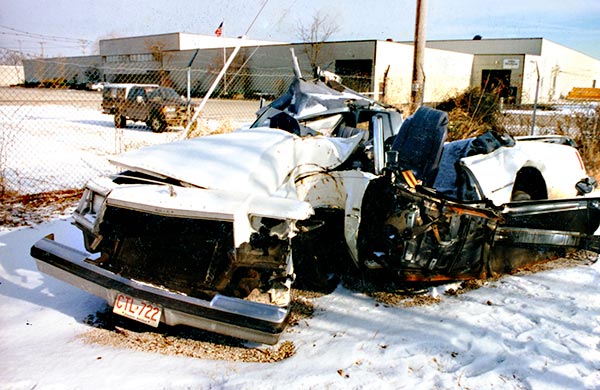 Today I live in Mukwonago with my husband and work at the local Post Office. I like to be involved in the postal food drive every year in May.

I also volunteer for a no-kill cat shelter fostering and caring for cats and kittens in our home. But the one thing I do to try to do is give back – I am a long time blood donor. I have also been able to get a few co-workers and family to join me at numerous blood drives.

I feel that the entire emergency response of all involved deserve a big thank-you. It was a great cooperative effort by all, one that put what was left of “humpty dumpty” back together again!

Comments for "Giving Back by Donating Blood"