Due to the severity of his injuries, Fox Lake Fire requested Flight For Life to the scene. Upon extrication, the flight crew inserted a breathing tube so that Jack could breathe and he was flown to Advocate Lutheran General Hospital, a level 1 trauma center. Jack suffered a multitude of life-threatening injuries from a traumatic brain injury, numerous fractures, spinal injury, an open head wound to a post-accident heart attack. His prognosis for survival was very poor.

Jack was hospitalized at Lutheran General for two months with four weeks of that time in a drug-induced coma. He was then transferred to Forest Villa, a nursing facility in Niles, for continued care and rehab. Jack’s two young sons, Nick and Joey, had to make the trip back and forth to Niles from their home in Lakemoor to see him during those four months. Upon discharge from Forest Villa he received rehab for an additional four months at one of the Rehabilitation Institute of Chicago’s facilities.

The past nine years have proved to be a long and frustrating journey for Jack. 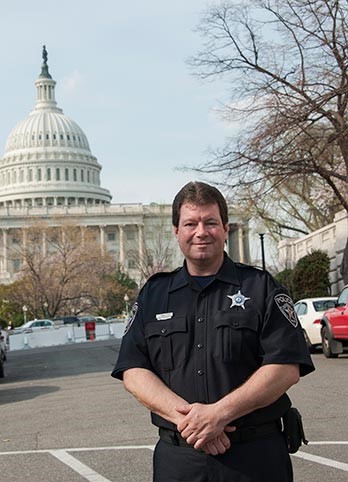 This journey has brought him from a month-long coma to a life that focuses on his two young sons and a complete recovery. The driver of the vehicle that hit Jack was under-insured so the family has suffered an enormous financial setback. Jack has endured more than eighteen surgeries and has more to go. Though his twenty year career at Gurnee Police Department is over, after eight years of hard work he was hired as a full time police officer on another department.

Jack is a fighter; he proved that when at age twenty-five he was diagnosed with Hodgkin’s disease, a form of cancer. It is the perseverance and attitude that Jack has exhibited since the accident, along with his family’s commitment to his recovery, which has made his amazing story possible. Jack is an inspiration and role model to us all, especially to those who have suffered similar debilitating injuries.

It’s been 22 years since I was transported by Flight For Life-McHenry; I was two years old at the time. I was flown to Rockford Memorial Hospital after experiencing a dangerously high blood sugar level that resulted in my being diagnosed as a type 1 diabetic.

Comments for "Committed to Recovery"