On January 29, 1984, my mother, who was 42 at the time, was vacationing in Eagle River, Wisconsin and was headed out for a day of snowmobiling. She started her snowmobile and proceeded down the same road they always traveled when she realized something was wrong. The throttle was stuck and before she could decide what to do, she crashed straight into a tree. When she looked up she saw a friend running her direction with his arms out ready to lift her out of the snow; she immediately told him not to move her. She knew the injury was bad.

The EMS crew that came to her rescue was skilled in dealing with snowmobile accidents and did an amazing job of transporting her to the hospital. It was determined that she had broken both clavicles, several ribs, punctured a lung and had a broken back. My mother was also a brittle diabetic which made her situation even more difficult to manage. The doctors consulted with one of the best orthopedic surgeons in the state and it was decided that he should perform the necessary surgeries. He was located at the Milwaukee County Medical Complex and it was determined that it would be too risky for her to be transported that far by ground ambulance. Plus the pain she would experience would be intolerable. This is when we were informed that a new medical helicopter program had just gone into service on the 26th called Flight For Life. Using the helicopter would make the transport faster and smoother for my mom, minimizing her pain.

I was a young child at the time and was brought to the hospital in Milwaukee to meet the helicopter when it landed.

I will never forget the sound of the helicopter, the wind that it made as it landed and watching it land in front of me.

At the time there was not a dedicated helipad but rather a designated area on the hospital grounds.

After being brought into the hospital, my mom was put in a special air bed where she had to stay flat on her back for several months while going through multiple surgeries, including one that involved going in through the front (abdomen) and moving organs so that the spine could be operated on.

If she had not been transported to Milwaukee County, this surgery would not have been possible. When mom was finally able to be released from the hospital an ambulance had to bring her home and I recall her saying, even then, that every bump in the road was painful. A hospital bed was brought into the lower level of our home as she was unable to climb stairs or sit up for long periods of time. Not long after she was brought home, a pin slipped in her back and it was necessary for her to return to the hospital for more surgery, which I know was very depressing for her. It was a long road to recovery, but in the end she returned to a perfectly normal lifestyle and you would never be able to tell by looking at her that she had been through so much. I can't imagine how different the outcome might have been without the amazing service of Flight For Life.

There were three kids in our family: Kevin, Stuart and me. My mother and father owned a business called Bachmann Brokerage in Hartland. They also had a vacation home in the north woods (Manitowish Waters) where she loved to kayak and garden, though she never went out snowmobiling again. When she was 62 she was diagnosed with ovarian cancer, the same age as her mother was when she was diagnosed. It was discovered she had the BRCA1 genetic mutation and after much chemo, surgeries and other treatments, she died on June 29, 2007 at the age of 65. She and my dad had been married 43 years at the time of her death with nine grandchildren.

Mom was so many things; strong yet loving, disciplined, quiet, caring, and smart. Her love for animals, especially dogs and wolves, led her to support the Best Friends Animal Sanctuary. 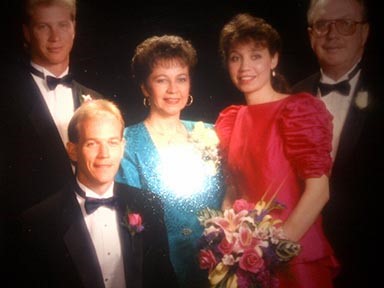 She appreciated art, especially with natural elements like stone or wood. It was because of Flight For Life and those who were involved in her care after the accident that she was able to enjoy the things she loved and we were able to have her in our lives for 20 more years.

I know she was so grateful for your service and the incredible kindness of the flight crew. Barb Hess, Flight For Life’s first program director, gave us FFL coffee mugs. I remember mom drank from one almost every day. Our family is thankful for all that FFL did for mom and our family.

Comments for "30 Years and Counting"